Amplifying LGBTQIA+ Activism and Uplifting the Pursuit for Equality and Fundamental 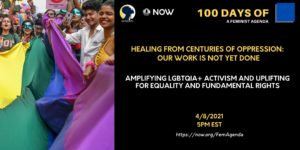 Event by National Organization for Women (NOW) and Black Women’s Blueprint
Online: us02web.zoom.us
Price: Free
Public  · Anyone on or off Facebook
“It is not difference which immobilizes us but silence. And there are so many silences to be broken.” ~Audre Lorde, Sister Outsider.
2020 saw a tragic new record of fatal violence against transgender and gender non-conforming people in this country, particularly against Black and Brown transgender women. More than 1 in 3 LGBTQIA+ Americans faced discrimination of some kind this past year.
Civil rights laws provide protections based on race, color, national origin, sex, disability, and religion. However, federal law does not explicitly protect individuals from discrimination based on sexual orientation or gender identity. LGBTQIA+ Americans are being denied basic legal protections in states across the country due to the lack of comprehensive federal non-discrimination laws. Their pursuit for equality and fundamental rights challenges cultural beliefs that insist on seeing tragedy in sex and gender identities that threaten a patriarchal status-quo. This thinking is informed by a racist paradigm that for centuries kept its foot on the necks of each of us while also confining men to a destructive code of toxic masculinity.
The Equality Act, which the House of Representatives most recently passed, is so crucial because it would provide permanent anti-discrimination protections for LGBTIA+ people across key areas of life, including employment, housing, credit, education, public spaces, and services, and federally funded programs.
Join us for another conversation in our 100 Days of a Feminist Agenda series. This conversation will draw you into a deeper conversation about one of the most taboo subjects in Black sexual politics – same-sex love and gender nonconformity. Our panelists will center the multilayered texture of LGBTQIA+ communities’ lives as it rarely ever is and hopefully help shatter the silence around the treatment across systems and society.