At The Edge of Authoritarianism in America 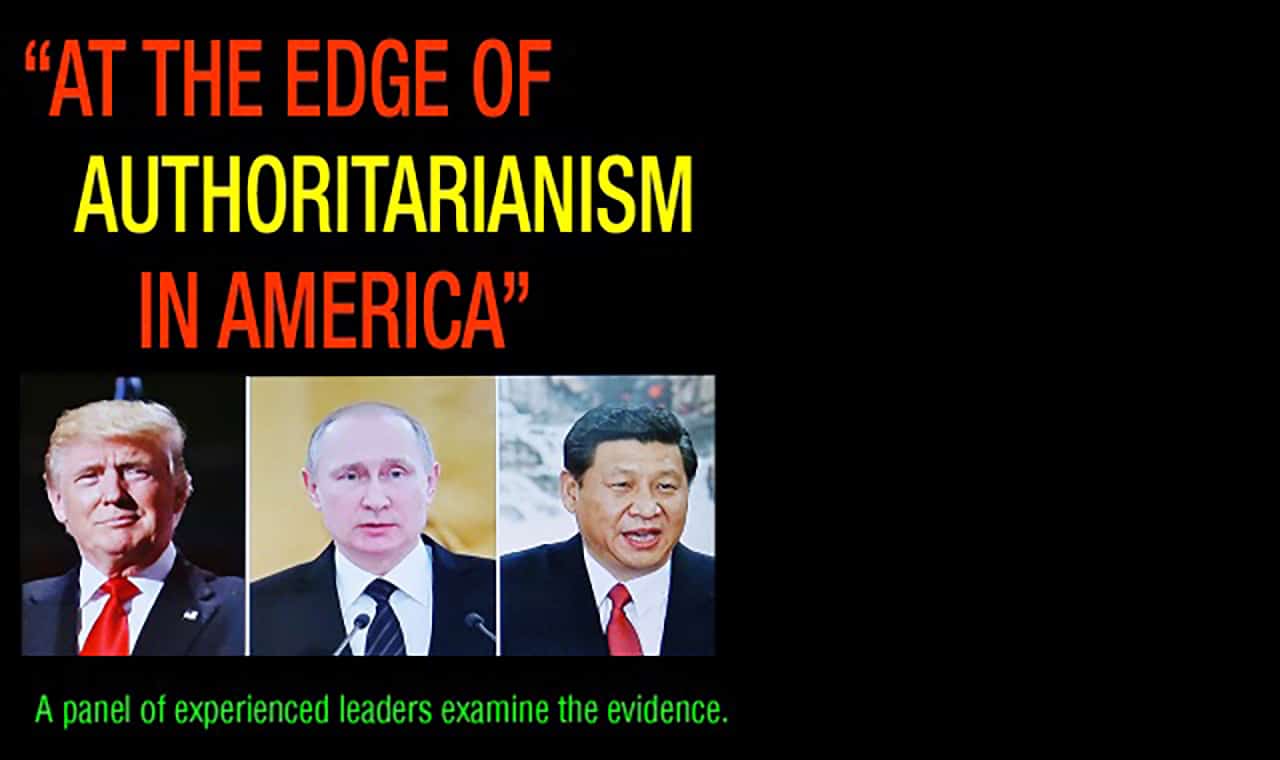 At The Edge of Authoritarianism in America

We are marching toward authoritarianism, perhaps fascism right here in the United States of America. Think about that for a minute.

For the past 31⁄2 years, the United States has been losing key elements of its democratic structure that have stood for centuries. The president, his Administration, and his supporters – both in and out of our federal government – have been taking action to wrest power from citizens and consolidate it in the hands of a “Unified Executive”. Our Constitution’s Checks and Balances are breaking down.

The Attorney General, Bill Barr, has written extensively, spoken widely, and taken direct actions in pursuit of this goal. President Trump has spoken openly of his desire to serve more than two terms of office, and has expressed strong admiration for autocrats like Vladimir Putin, Xi Jinping, and Kim Jong-Un, because he admires their raw, unchecked power.

American citizens have taken to the streets across our nation in unprecedented protests that have often been met with crushing police and military force that was encouraged, if not directed by the president. In cities that have not harshly put down protests, the federal government has explored the option of charging their mayors with sedition. Voter suppression efforts are widespread, and our historic foe, Russia, has continuously and effectively attacked our democracy in support of Trump.

African Americans, over four centuries of oppression, have tasted the bitter sting of the slave master’s whip, seen the horrors of Klan lynching, and felt the boot of Jim Crow on their neck. Even after emancipation, they have been denied health, prosperity, and full participation in our democracy. For many Black people, authoritarianism in America is reality.

The Space Coast Progressive Alliance will bring together a panel of experienced leaders to examine the evidence of our nation’s shocking decline. They will examine the historical context of how “The Leader of The Free World” has fallen to its knees, and we will hear personal accounts from people with first-hand experience of living under dictatorships and suffering from authoritarian rulers.

Please join us on October 1st for our next “First Thursday” virtual event (using the “Zoom” app), entitled: “At The Edge Of Authoritarianism in America.” Please join us at 6:30 p.m. using the Zoom link that will be posted on our website. The last portion of the event is – as always – reserved for you. Those of you who are logged on, will get to participate in a Q&A with our panel. If you prefer, you can watch via Face Book Live. Our Face Book page has all the details.

This November’s election will possibly decide whether American Democracy will stand or fall. This is not an exaggeration. The decision will be in the hands of you – the voter.

Our panel of experts will be:

Raed Alshaibi – Vice President, SCPA. A businessman who was born in Palestine, and raised in Jordan, and has witnessed the horrors of oppressively authoritarian governments across the Middle East for his entire life.

José Luis Rivera-Villamañán – A businessman, entrepreneur, and
philanthropist who serves as president of Grand Productions and the PRUSA Channel, and is on the Florida Hispanic Chamber of Commerce. He was raised in Spain and Puerto Rico, earned Bachelor’s and Master’s degrees from universities in Kansas and Arizona, and has travelled extensively in Europe, Latin America and globally. He has personally experienced the dangers of authoritarian dictatorships in several places.