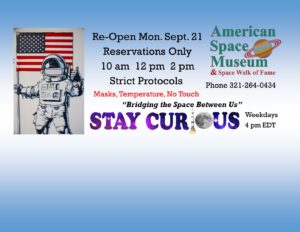 Former NASA director Jay Honeycutt will be our guest Thursday Sept. 10 on a special “Stay Curious” edition on Facebook Live at 4 pm EDT. Honeycutt, who oversaw 14 Space Shuttle launches in 1995-1997, will share the highlights of his nearly 40 year career in the space business.
A resident of Cocoa Beach, Florida, Honeycutt will join host Mark Marquette at the American Space Museum for a conversation about the excitement of the 30-year Space Shuttle Era and his unique contributions to the American Space Program.
Honeycutt served as the director of Shuttle Management and Operations, Kennedy Space Center, from March 1989 until he was named KSC Director by NASA Administrator Daniel Goldin. Honeycutt was responsible for engineering management and technical direction of preflight, launch, landing and recovery activities for Shuttle vehicles.
Born and raised in in Jena, Louisiana, he earned a bachelor’s degree in electrical engineering, from the University of Southwestern Louisiana, Lafayette, Louisiana. He has enjoyed retirement on the Space Coast with wife Peggy.
Honeycutt began his Government career at Redstone Arsenal in Huntsville, Alabama, as an engineer in 1960. He began his NASA career at the Johnson Space Center (JSC), Houston, Texas, in 1966 as an engineer in Flight Operations for the Apollo Program. Honeycutt subsequently served in several key positions in Flight Operations until 1988.
In 1981 Honeycutt served as technical assistant to the associate administrator for the Space Transportation System, NASA Headquarters. From 1982 to 1986, he served in management positions in the Space Shuttle Program Office at JSC.
From 1986-1987, he was special assistant to the associate administrator for Space Flight, and coordinated Presidential Commission and Congressional activities relative to the Challenger accident. Honeycutt served as deputy manager, NSTS Program Office, NASA Headquarters, from 1987 to 1989.