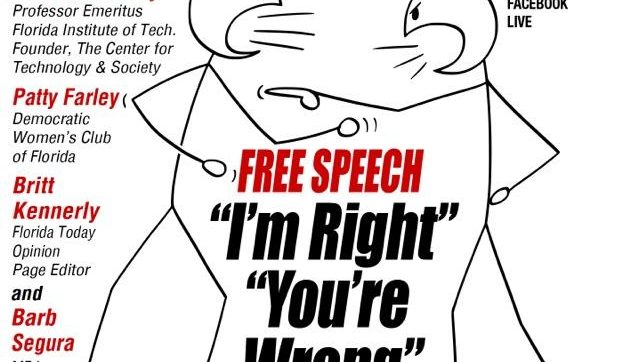 As citizens of the US, we know that we have the basic human right to freedom of opinion and expression. We understand that it is fundamental to a democracy. We also understand that there are certain restrictions to freedom of speech relating to libel, slander, obscenity, pornography, sedition, copyright violation, public security, perjury and not creating a panic by shouting FIRE in a theater.

The concept of freedom of speech and expression is thought to have emerged in the late 6th or early 5th century BC from an ancient Athenian democratic principle. Throughout history, its nuances have been discussed over and over. With the invention of the commercial printing press in 1450, it was not surprising that propaganda, arguments and censorship heated up. Here at home today, freedom of speech often becomes personal, may border on lies, creating conflict that can degenerate into “I’m right; you’re wrong”. The source of conflict usually lies with the media, the internet, politicians and/or family and friends. During our program, experts from each of these entities will share their experiences in dealing with differing opinions.

Robert V. Taylor, the President of the Desmond Tutu Peace Foundation, has said, “you don’t create peace by talking with people that agree with you, that have the same opinions as you. Peace comes from having a dialogue with people that are different than you.” As citizens of the US, can our better selves be willing to calmly discuss differences, be open-minded or even just change the channel or the topic in the interest of peace?

SPEAKERS
Scott Tilley
Scott Tilley founded The Center for Technology & Society in 2016. He’s a
professor emeritus at the Florida Institute of Technology, president of the Big
Data Florida user group, Senior Fellow at the American Security Council
Foundation, a Space Coast Writers’ Guild Fellow, and author of numerous books.
He holds a Ph.D in computer science from the University of Victoria.

Barb Segura
Barb Segura is a Licensed Clinical Mental Health Counselor and Certified
Addiction Counselor. She worked in the prison system for twenty years and has
worked with military members and their families in the early years of the
Afghanistan and Iraq Wars. Barb imagines an America where there is enough
food, livable wages, affordable housing and healthcare for all in harmony with our
environment.

Britt Kennerly
Britt Kennerly is Florida Today’s Opinion page community issues columnist. A
veteran journalist she has interviewed everyone from a former U.S. president (Jimmy Carter) to the world’s most famous atheist (Madalyn Murray O’Hair); from
Tony Bennett to Goober and Gomer from “The Andy Griffith Show” and even a
woman who held 4th of July birthday parties for a dog named Yankee Doodle
Dandy. She grew up in Kentucky, attended UK and University of Cincinnati and is
a graduate of UMass Amherst. Britt has been at FLORIDA TODAY for 11 years.

Patty Farley
Patty Farley is currently in her second term as President of the Democratic
Women’s Club of Florida. She is a professional educator, certified to teach all
areas of Social Studies, Science and Gifted Studies with the focus on US
Government and History. Patty’s other roles include: current Space Coast Labor
Council Secretary, member of the Florida Democratic Party Executive
Committee, Treasurer of the Democratic Labor Caucus of Florida and various
volunteer leadership roles in many organizations